Yes, Somebody Once Thought A Cat Piano Was A Good Idea

The history of psychology is full of misguided individuals, and it’s taken a lot of stumbles to bring the field to where it is today. But no one stumbled harder than German psychiatrist Johann Christian Reil (1759-1813), inventor of the Katzenklavier, or “cat piano.”

Though the words “cat piano” make it sound like Reil invented some kind of teeny piano for an adorable feline virtuoso to play with its little paws, the actual contraption was roughly eight billion times more horrifying. He arranged a bunch of cats by the pitch of their mews and stuck their tails under the hammers of piano keys so they’d howl when people hit the keys. 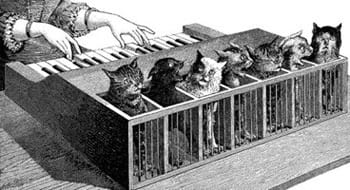 La NatureThe only song you can play on it is the theme from Saw.

Reil believed that the best way to deal with a “diseased brain” (complex medical terminology at work here, people) was to shock it. He wanted to try the medical equivalent of sneaking up behind the psyche and yelling “BOO!” Because healing mental illness is precisely as straightforward as curing hiccups. Fortunately, the contraption was never put to actual use, so we’ll truly never know if all modern-day mental illness could simply be cured by hearing a bunch of cats painfully shrieking “Chopsticks.”

(Also, Reil was the guy who coined the term “psychiatry,” which is sort of like learning that Michael Bay invented the word “subtlety.”)

Look, we know you were probably expecting something a little more like this when you read “Cat Piano”. Sorry, not sorry.